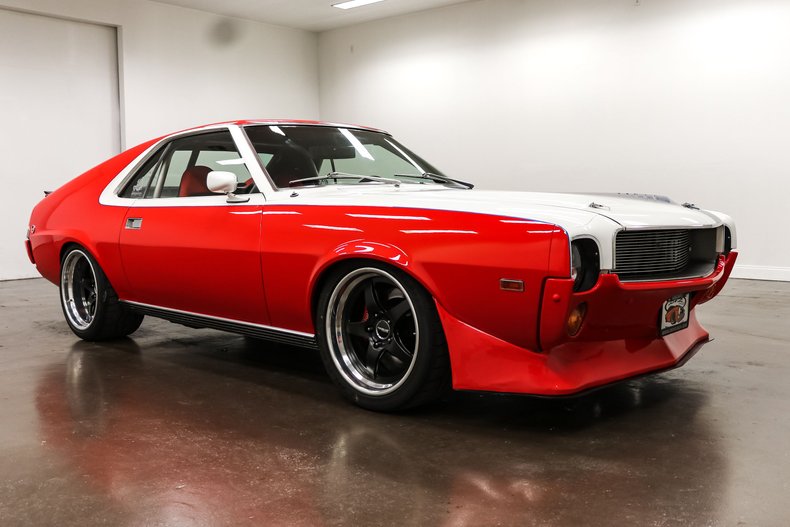 This 1969 American Motors AMX was built to be an example of “the ultimate street car”. The car retains all of its AMC heritage and style but has been completely updated and upgraded throughout. The two-seater coupe features a two-tone red and white color scheme with blue accent stripes, and has a low and lean stance, harkening back to the halcyon days of Trans-Am racing. It even includes a Trans Am replica adjustable rear wing. The car was designed by the owner and built by D&Z Customs in Wisconsin, and it retains all its original body panels, floor panels, firewall, and glass.

To prove that form and function do indeed go together, AMXess has competed in the grueling One Lap of America, where it finished 2nd in the Vintage American class logging 4010 miles and 17 track events in a single week. It's also completed the Silver State Classic Challenge – a 96-mile time/distance race. AMXess has competed in many other track and HPDE events like The Sand Hills Open Road Challenge, OPTIMA's Ultimate Street Car Invitational, Motorstate Challenge, Midwest Musclecar Challenge, and Goodguys Duel in the Desert. The AMX has seen track time on some of the most famous racetracks in the US including Daytona International Speedway, Laguna Seca Mazda Raceway, Road America, Watkins Glen International, Circuit of the Americas many, and others. It has also traveled around the world as part of a group that represented the automotive industry in Riyadh, Saudi Arabia. It's beautiful, it's solid, and it's sorted and dialed in. It's as comfortable and reliable on the street as a new car and gets over 20 mpg – but she's a real performance sports car on the track.

The engine is a 376 CID GM Performance LS3 with an LS7 camshaft upgrade – the same engine that powers the mighty C6 Corvette. A GM computer fires the coils and fuel injection system and takes care of all the tuning. Fuel is delivered from a Ricks Tank through the Vaporworks delivery system and there's a very conservative tune in the car performed by Peitz Performance Tuning – the car currently makes 550HP. An OPTIMA Battery provides the spark.

An all-aluminum Be Cool radiator keeps temps in check and an Accusump oiling system makes sure oil pressures are good under any circumstances. A Vintage Air Frontrunner system completes the package, positioning the A/C, alternator, and power steering units, all from GM. Oil and power steering coolers keep perfect temperatures in the hottest of conditions. The engine bay has been smoothed and painted to showcase the mechanical genius that is the LS engine.

Power is transferred rearward through a smooth Centerforce DYAD triple-disc clutch in front of a Bowler Performance LGT 700 five-speed transmission with 3.55:1 fourth and .6 overdrive gear mated to the Ford 9” rear with Randy's Ring and Pinion gear positraction gearset. AMXess is suspended on all four corners with Ridetech triple adjustable coil-over shocks. The front end has a custom chassis featuring Detroit Speed upper and lower control arms with a custom K frame from Heidt's Performance. Corvette hubs and spindles complete the package. The rear is a D&Z-designed 4-link system, with multiple adjustments for autocross, road racing, and drag racing. Strange axles keep everything rotating properly.

Wilwood six-piston calipers on 13.5” full-floating rotors provide the stopping power and assure that brake knockback is not an issue. Wilwood BP 30 brake pads provide the most efficient braking on both the street and the track. The tire/wheel package is Forgeline GF3's – 18X10 and 18X11 with iconic black 5 spoke centers surrounded by polished aluminum hoops. Tires are ultra high performance Falken Azeniz 615K + 315/30 rears and 275/35 fronts.