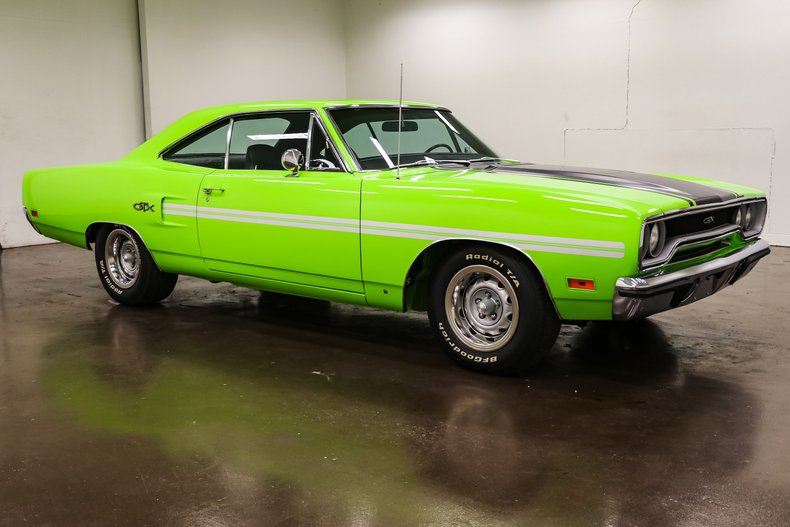 Intended as the luxurious yin to the inexpensive Roadrunner's yang, the Plymouth GTX was every bit the muscle car that it appeared to be. This eyeball-popping 1970 Plymouth GTX packs a numbers-matching 440, 400 miles on its restoration, awesome documentation, and a long list of options that make it an A-list ride for any Mopar fan.
Refinished in the original FJ5 Limelight Green, making it a relatively rare beast, this gorgeous GTX's restoration was completed just 400 miles ago. It's so shockingly clean underneath, that it's hard to believe that it's all original sheetmetal, but by starting with an ultra-clean original car, they only needed two small patches in the lower quarters and a new tail panel. Those massive quarters are straight and wave-free, the gaps are awfully good, and the blackout hood treatment and white side stripes give the big, green machine a nasty disposition. This is also an original N96 Air Grabber car, adding to its uniqueness. The original bumpers were re-chromed, not replaced, there are new HID headlights, and all new glass to make it feel like you just drove it out of the dealer's showroom in 1970. It is extremely impressive.
The black bucket seat interior was freshened, but not totally restored, giving you an idea of how clean this car really was. There were a few split seams so replacement seat covers were installed and things like the carpet and floor mats were replaced, but otherwise that's a mostly original driver's compartment. The gauges were all restored, including the Tic-Toc-Tac that was set up to work with the electronic ignition system and the clock was converted to quartz movement for reliability. The original steering wheel was restored but all the chrome bezels, handles, and trim are original and were just polished up and reinstalled. This one also carries an original style AM/FM radio with an iPod/Bluetooth interface, adding to the GTX's level of sophistication. In the trunk there's a new mat and a full-sized spare tire with date-code-correct jack assembly. And wow, this sucker is clean!
This car's biggest claim to fame is the matching-numbers U-code 440 cubic inch V8 under the hood. The guys at GAM engines built it to run and tuned it on the dyno to the tune of 504 horsepower and 635 pounds of torque, and we have the dyno sheets to prove it. It uses a few tricks like a set of Edelbrock aluminum heads painted to match the block, a hidden MSD ignition system, and a rather healthy cam inside. With only 400 miles since then, it has barely been broken in and runs superbly. The engine bay is nicely detailed with Hemi Orange paint, the aforementioned original restored Air Grabber assembly, and a set of beautiful long-tube headers. Other important details are the reproduction hoses and clamps, a new ballast resistor on the firewall, and a reproduction red cap battery. The 727 TorqueFlite 3-speed automatic has also been rebuilt and carries a shift improvement kit and TCI torque converter. In addition, it now spins a bulletproof Dana 60 rear end, which was powdercoated and filled with 3.54 gears and Dutchman axles. The floors are as beautifully finished as the exterior bodywork, the exhaust system is an absolute work of art, A full Hotchkiss suspension system, Wilwood front disc brakes, and a new gas tank are just some of the additional upgrades. Correct Rallye wheels wear a set of staggered 225/70/15 front and 275/60/15 rear BFGoodrich radials.
Mopar fans, don't miss this opportunity to own a matching-numbers big block GTX with an unusual color combination and a dynamite restoration that was built for combat. Call today!

Thank you for your interest! We will get back to you soon.
You may also be interested in.....